The Potentially Unwanted Programs or PUPs are software that wants to access your data and create a loophole for the other dangerous malware. PUPs are such software that looks like a legitimate one, but they spy on you on your back. Such software cannot be classified as spyware or malware because they took your consent to track your data, which you don’t know about. In this article, you will know about the PUP in detail. Keep going.

How does the PUP/PUA Work

Potentially Unwanted Program/Application (PUP/PUA) takes your consent to track your data without you even realize. Mostly, such software is bundled with freeware or shareware applications. You don’t even know that there is a bundled software. So when you download and install the freeware software, you also install the PUP in your PC and give your consent to track and record your data. You never wanted to install that application. That’s why it is called Unwanted Programs. PUA, which stands for Potentially Unwanted Applications, is similar to the PUP.

Most of the time, users can deselect the bundled software. However, they consider it an essential feature and don’t deselect. Once it enters in their PC, it hijacks the browser’s settings or installs an add-on to the browser to track the user’s activity.

The adware PUP is not Google ads you see on most webpages; the ads are of malicious and fraud products. If you consider these ads, they might infect your PC with the real malware that could cause severe damage to your data.

Why PUP Malware keeps coming back

PUPs keeps coming back because they are designed in this way. The creators of such programs are aware that once you know that this software is tracking my activity, you will try to remove it. That’s why they create a backup plan to again enter in your computer. They might create a registry entry that will restore them when you restart your PC. They could leave the installation files somewhere in your PC which gets executed automatically after the restart.

Another common reason of PUP keeps coming back is that you install the software again that it was bundled with. So it again enters in your PC, and you think that this PUP is stubborn. So it is a good idea to identify the installer that is bundled with the PUP and never run it.

You cannot only uninstall the PUP from your PC and get rid of them. You need an excellent antimalware or PUP removal tool that scans your PC thoroughly from the browser settings to the files hidden in your temp directory. And remove it from there. The tool should also examine the registry so that it can remove the entry created by the PUPs.

There are lots of PUP and PUA removal tools on the internet. I would recommend you the only that works and is effective. It is MalwareFox antimalware. It will not just remove PUPs from your system, but it also removes the malware from your computer. It effectively works on adware, spyware, keyloggers, rootkits, ransomware, and zero-day malware attacks. MalwareFox’s real-time protection stops the threats even before they start damaging your PC.

Apart from catching these threats, MalwareFox put special care on PUPs. It detects and removes suspicious browser settings, extensions, add-ons, and browser redirects effectively. Below is a screenshot of MalwareFox in action over PUP/PUA. 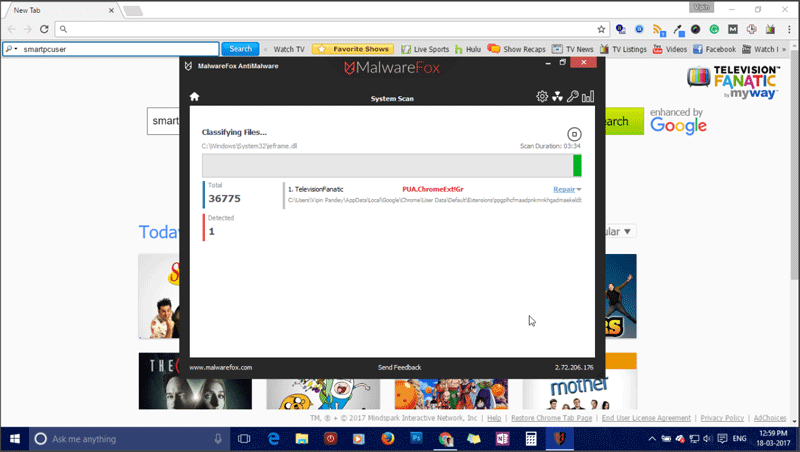 There are several other PUP removal tools such as HitmanPro, Revo Uninstaller, and SUPERAntiSpyware. You can also give them a try.

Generally, PUP files are not that much dangerous compared to malware and virus. Their actions are not classified as a virus or malware. Since they track your data after getting your permission, which you provide unknowingly so you can consider them like a virus or trojan. However, the PUP that tracks your browsing activity and redirects you to the malicious pages is dangerous enough that could drag you in critical situations.

So when you know that there is a PUP in your system, you don’t need to panic. Though, you must remove it from your system as soon as you are aware of it. It might be possible that PUP already has created a loophole for malware and you might be infected. So, it is necessary to scan your system with a strong antimalware, that could remove the PUP as well as look for potential malware infection.

People who use Malwarebytes scan, often see the detection as PUP.Optional during the scan or in general. The PUP. Optional is not dangerous because the file that is detected is considered PUP because of its bad reputation. So you do not need to worry about it, though we recommend that you should remove it as soon as you find about it.

Further Reading – What is Grayware?