Palladium Antivirus with alias Palladium Pro is a fake security program that was found out to be a variant of Security Shield. This fake antivirus tool will runs a virus scan on system start-up. It also initiates the same process when its icon from Windows task is clicked by user. On these scan, several fake results is displayed as a deceptive means of its authors. It tries to convince computer users into having the licensed version of Palladium Antivirus before any fix can be carried out on the computer. A redirection to its own payment web site is observed each time user tries to remove any detected threats. Just like its old variants, Palladium Antivirus will force computer users to pay for the program and will held it hostage by blocking legitimate programs from running.

As you can see, Palladium Antivirus was made to get money from its victims by forcing the malware to control the infected system. This trick compels some users to buy this worthless program. We do not advise you to do the same, as you will only help finance malware authors. Ignore Palladium Antivirus as much as you can and focus on removing this malware. 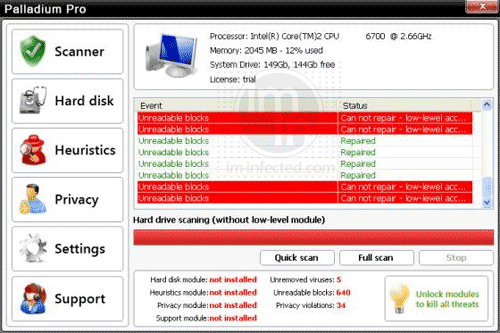 What are the Symptoms of Palladium Antivirus Infection?

How to Remove Palladium Antivirus Manually

1. Restart your computer in SafeMode
– After Power-On the computer, just before Windows start, press F8
– From the selections, Select SafeMode

2. Remove Registry entries that the threat added. You MUST BACKUP YOUR REGISTRY FIRST.
– Click Start > Run
– Type in the field, regedit
– Navigate and look for the registry entries mentioned above and delete if necessary

3. Delete malicious files that the threat added:
– Base on the given location above, browse and delete the file
– If no location is given, click Start>Search> and search for the files.
– If cannot be deleted, press Ctrl+Alt+Del to access Task Manager, see if the file is running in the process. If it is, select the file and click End Process. Perform file delete again.

How to Easily Remove Palladium Antivirus

1. Download and run Malwarebytes Anti-Malware from ths link to remove this computer threat.