Total AV is an antivirus that supports Windows, Mac, Android, and iOS devices. The antivirus is said to protect you from different types of threats such as ransomware, spyware, and trojans. Also, some websites promote it in a way that it is the best antivirus out there. However, not all the users fully trust it. In this article, we will know more about Total AV and also try to conclude if it is safe or not?

Total AV is fully featured antivirus that protects all your devices, including PCs and smartphones. It comes in both free or paid version. The paid version of this tool comes in just $19.99, which is the cheapest. If you compare the price with other antiviruses, there is a vast difference. The features that Total AV claims are protection blocking dangerous URL, Real-Time detection, System boost, Disk Cleaner, Junk Cleaning, Duplicate File Finder, etc. There is a password vault and VPN feature also. You will get all these features in a single application. It inspects the URL and reports if the site is safe or not. 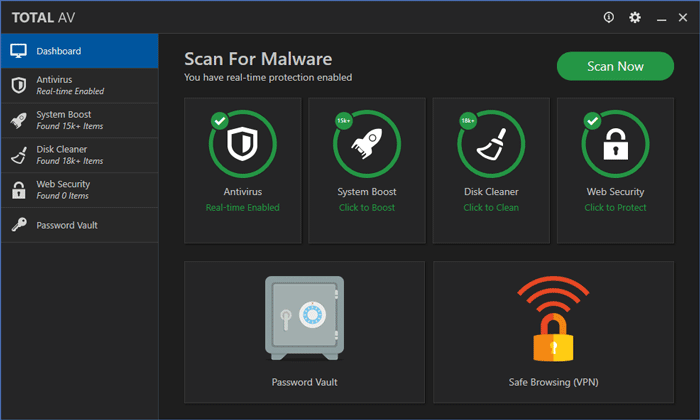 If you look at the website of Total AV, the features they have listed are excellent. These are the kind of features an antivirus should have. However, when it comes to reliability and customer satisfaction, there is none. User is not trusting it because most of them have a terrible experience with it.  Features wise Total AV looks appealing, and the interface of the application also looks clean and genuine. However, according to users review, Total AV is nothing but a scam. They have pathetic customer support. They try several methods to trick users and steal their money.

To check if the Total AV is safe for your PC, I download it and then checked it on VirusTotal. Three antivirus engines detect Total AV as Potentially Unwanted Program (PUP). Dr Web, ESET, and Malwarebytes out of 65 other search engines consider it as PUP. For those who don’t know about VirusTotal, it is a hub for all antiviruses. You can enquire a file or URL, and VirusTotal will check it in several antivirus engines and then report back with the detection. So you will get a clear idea about software or program. I will not install software on my computer if even a single antivirus considers it as malware or PUP. Here three antivirus engines detect Total AV as PUP.

Antivirus engines consider it as PUP because Total AV follows terrible practices. At the time of purchase, they bill you more than the subscription charge. Also, there don’t follow the refund policy. In the free antivirus product, almost all the features require you to purchase the software. All these methods make Total AV a PUP.

If you search for Total AV on the internet, you will find excellent reviews. Several websites have said kind words about this antivirus. In fact, some sites have given the first rank in their top antivirus list. However, when you look at the forums and the real user’s comment, you will see the wrong words. Almost all the comments you will find are negative. Users share their experiences on the forums and warn other users.

The user Vincent recently said in a comment that he had been charged wrongly.

Another user Maria, is also reporting about the wrong charge.

Below is another user Ne Ne, it is hard to get a refund from the Total AV as they don’t follow their refund policy.

Users reviews suggest that you should not trust the Total AV and never give your Credit card details to them.

If you look at the other websites ratings and reviews, then you will find that Total AV is the number 1 antivirus out there. They give it full numbers in all aspect. However, when you read the real users reviews and comments, you will realize that Total AV is nothing but a scam. Even antivirus engines like Malwarebytes, ESET, and Dr Web detect it as PUP. So, it is clear that the positive reviews and ratings on the websites are paid one or probably they are affiliate partners. I will never install software, especially an antivirus that is considered as PUP on my PC. I suggest you do the same, don’t give them your credit card details unless you want to get scammed.