In this modern world, privacy is the greatest myth. Marketing companies are trying every possible way to track your data and provide the most productive ads for the maximum output. For them, the messaging apps have become the hot target, as that’s where the users spend most of their time.

Apart from marketing purposes, messaging applications are also being spied by the government for various reasons like national security and others.

Everyone has some conversations on their messaging apps that they want to keep private. Whether sharing an embarrassing moment with your close friend or expressing your feelings for someone or a business conversation with your client, you don’t want anyone else, especially the advertising agencies to know about any of that.

There are many messaging applications that advertise themselves as a secured platform for online chatting. They claimes that messages exchanged on their applications are end to end encrypted i.e., nobody can access the messages until they have a key to decrypt them.

However, most of these apps don’t act as they are supposed to. Even though they claimed to be highly encrypted, this deeply researched report says otherwise.

But hang on, you do not need to worry about your chat privacy anymore, we have created a list of the five most secure messaging applications, that you can use for your extremely private conversations.

Wire Personal is a free cross-platform messaging app that follows most of the privacy and security standards. It supports all mobile devices as well as desktop devices, though its Linux version is still under testing. Wire is not a much popular messaging app, but its interface is much like other apps. If you are active on most of the popular social media chat apps, then getting used to Wire will not be a difficult task for you.

The Signal is one of the most secure apps that you would found. It is an open-source app created by a group known as Open Whispers Systems. Although it does not have a large user base like other popular messaging apps such as Whatsapp and Facebook Messanger, it is still more advanced than those two apps.

According to its users, this app takes care of both privacy and usability equally.

The messaging protocol on which the Signal is based is considered to be the most secure one. This protocol is even used by Skype for its Private Conversations option and Facebook Messanger for its Secret Conversations feature.

Signal does not track your activities; it is ad-free and totally free to use. 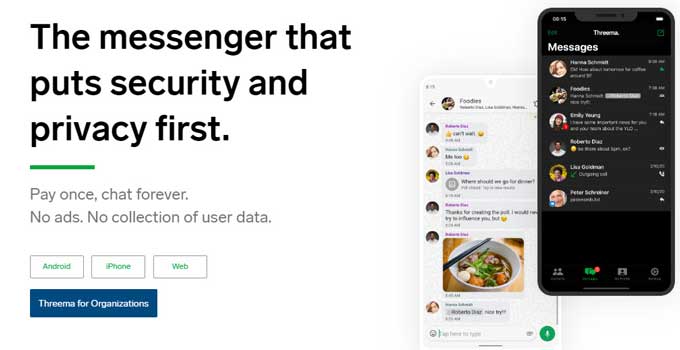 Threema is another excellent application to safeguard your privacy from the marketing companies and the government. It is one of the few messaging apps that provide total anonymity; that is, there is no need od any phone number or email id for the sign-up process. It encrypts not only the messages but the phone calls too.

This app also makes it sure that messaging data that goes through its servers are deleted immediately after the delivery. Also, it does not store any contact details on its server’s database.

The files remain with you locally on your device and not on any servers so that hackers could get their hands on them.

Apart from its security features, Threema also provides the full functionality that any standard messaging app should have. It allows you to send files, videos, contacts, create groups, and conduct polls in the group. Although it is not available for free of cost, the price is quite nominal, just $2.99, considering the privacy it is providing.

Wickr is another messaging application that provides you total anonymity. For using it, you do not require to submit your phone number or email id. It is available for almost every platform. It has very few users but can be considered an excellent privacy application. Apart from messaging utilities such as voice calls, video calls, image sharing, video sharing, and others, Wickr also provides the ability to share your screen and location, which makes it a collaborative app too. 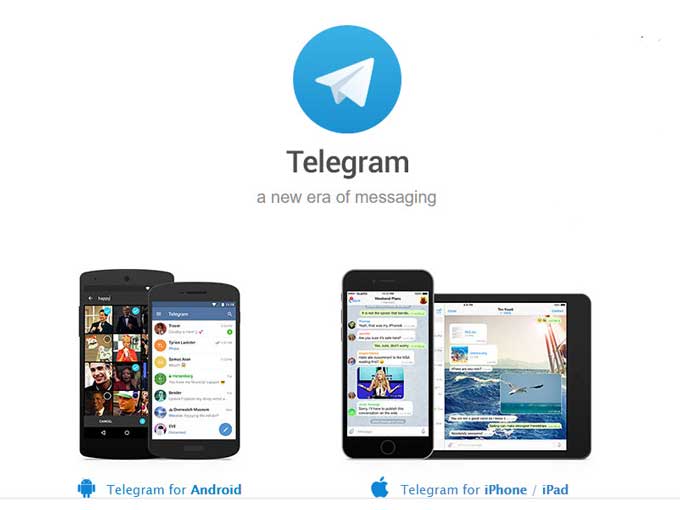 This name might be familiar to you. It is because Telegram is one of the most used messaging application in the internet world, with almost 200 million active users around the globe.

Telegram provides a lot of privacy features such as self-destructing messages, secret chat, and 2FA. It also offers its native app across all platforms. However, there are problems with Telegram as compared to the others on this list. Its end-to-end encryption works only in the Secret Chat feature. It keeps a record of your IP addresses.

All in all, Telegram is a great application, but you should use it only because it has a good user base. Other applications in the list are way more secured than Telegram

These are the top five most secure messaging applications. Although some of them are not popular enough, so they don’t have a vast user base, but as mentioned, they could be used for secret chats, that’s all.