RogueKiller (by Adlice Software) is a portable security program that scans for malicious files, processes, and registry entries. It terminates known suspicious items that mostly belong to viruses and malware. If a process running on the computer is eating up most of the resources, RogueKiller is the tool that you can use to terminate it.

Using RogueKiller is simple. It was made to be user-friendly. Interface was designed to present all available features of the program. Aside from rogue program removal, this tool is equipped with tools that can fix malware-modified hosts file, DNS, Proxy, and shortcuts. There is also an option to scan for master boot record (MBR) of the infected computer. This ensures that viruses can never hide on that covert location of the hard drive.

Computer users from various regions can now use RogueKiller to remove any infection on the computer. It now has multilingual support. Furthermore, this tool can be use in conjunction with your antivirus software causing no conflict. RogueKiller utilizes very low CPU and Memory resources so running both scans simultaneously will not be a problem.

Although RogueKiller can kill almost any threat on the computer, this program is not a replacement for your antivirus program. It does not have real-time scanning engine that prevents Trojans, viruses, and malware from penetrating the computer. 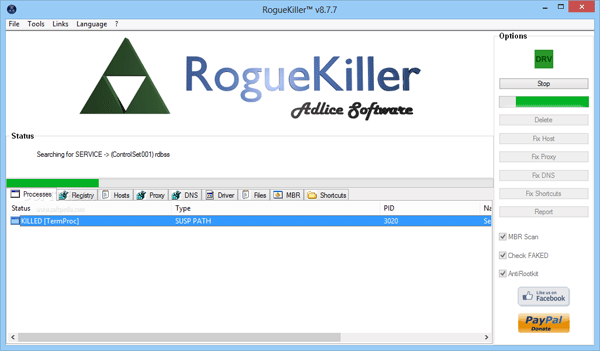 Always obtain a copy of RogueKiller from legitimate sources only. Save the file to a convenient location such as your desktop. If you will be using this tool to another computer, we suggest placing it on a USB flash drive that has write-protect function.

How to use RogueKiller

RogueKiller requires no installation. Just run the executable file to launch the program. Click the Scan button to start checking the computer for presence of viruses.