Due to the raging spread of fake antivirus in past few years, it is likely that variants of this malware have infected millions of computers worldwide. One of the causes of rogue program infection is Trojan. Once it infiltrates a system, it executes visual payloads. It often exhibit pop-up alerts stating several virus infections detected on the computer. This alarming message can scare users and persuade them to buy the rogue software, trusting that it can remove threats. However, victims who have acquired the fake antivirus usually end-up with an infected computer and illegally charged credit card account.

TrendMicro developed a tool to remove malware from an infected computer without the need to install a separate program. Initially, the security software company releases Fake AV Remover, which was later put into archive. It was replaced by an improved version and was called Anti-Threat Toolkit. This stand-alone tool quickly and easily removes viruses, spyware, and other malware threats. It works fine with any installed antivirus program without a conflict. 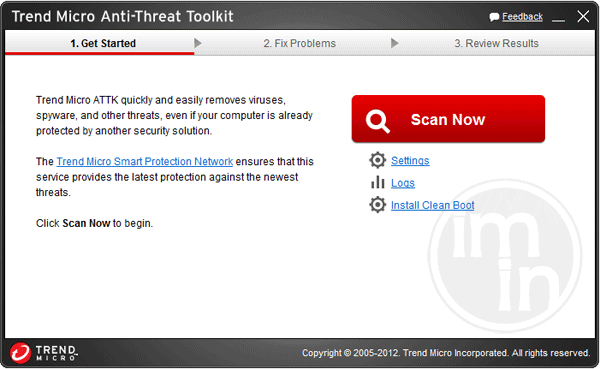 Always download a copy of ATTK Fake Antivirus (FakeAV) Removal Tool from legitimate sources only. Save the file to a convenient location such as your desktop. If you will be using this tool to another computer, we suggest placing it on a USB flash drive that has write-protect function. There is a great chance that ordinary USB flash drive might be exposed to threat when inserted on the infected computer. We highly recommend graphical user interface mode. Download one from the following packages that is appropriate to your version of your Windows operating system.

TrendMicro’s Fake Antivirus (FakeAV) Removal Tool requires no installation. It is a stand-alone tool that instantly lauch the scanner once executable file is clicked.

1. After downloading the program, double-click on the file to run. If malware is blocking the tool, you can do any of the following:

– Rename the file to svchost.exe of iexplore.exe
– Change the extension for the file from .exe to .com

2. Scanning the computer and detecting malware is straightforward. Just click on Scan Now button and the tool instantly locate any threats on the computer.

3. After the scan, it will display a list of identified risk. Tick all items and click Clean button to start removing them.

Robert is a highly motivated writer with 3+ years of experience writing for ransomware, malware, adware, PUPs, and other cybersecurity-related issues. As a writer, he strives to create content that is based on thorough technical research.