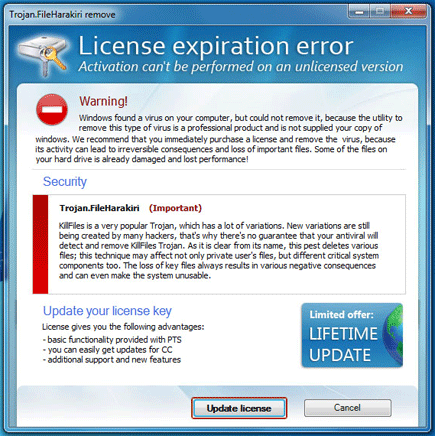 Trojan.FileHarakiri is an exhibited threat on computers that is believed to be infected with a rogue program. This detection was aimed to deceive victims and make them believe that computer is under attack. To remove Trojan.FileHarakiri, the pop up alert suggests to update to a licensed version. By doing so, Internet browser will open a payment web site where users can purchase the registered version using their credit cards. This transaction will be able to charge the target users credit card as a payment for the endorsed rogue antivirus program. Security alert will contain some text in the following format: 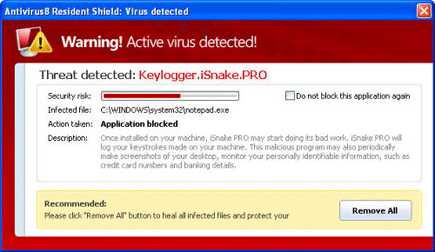 Antivirus8 Resident Shield will imply that computer is infected with Keylogger.iSnake.PRO and advise that it must be remove with the registered version of the program. This tactic has been used and abused by various kind of rogue security software as a promotional method to sell their products in a fraudulent manner. This fake warning will ascend from your Windows task bar and appears aggressively on the computer screen. The message states that:

Pop up message “Windows Security has found critical process activity on your system…” is issued by rogue security software to induce users into using their software as a virus removal tool. This fake warning will lead to a more annoying and devastating pop-up alerts when executed. 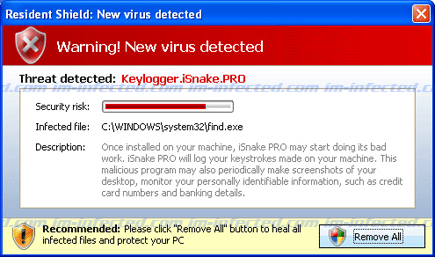 Keylogger.iSnake.PRO is a detection of an imaginable threat that aims to deceive computer users and force them to acquire a registered version of AntivirusGT. There is a real Keylogger.iSnake.PRO virus but coming from an unknown program, rest assure that this keylogger does not reside on the computer. If there is one thing you have to remove, it is the rogue program that detected it. The message content will be:

“Warning: Infection is Detected” is a fake alert message that user may observe when a rogue program called Wireshark Antivirus bothers the computer. It has been a tactic of bogus anti-virus software to persuade victims with scary task bar messages like this one. Later the malware will advise them to obtain the registered copy of the software to be able to clean the PC. 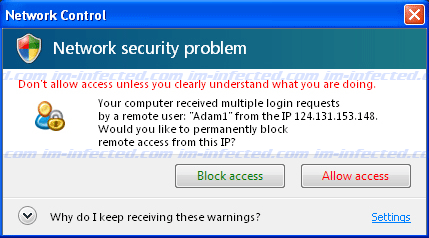 Network Control, Network Security Problem is a pop-up alerts that frequently displays on the computer infected with a fake tool called Network Control. The purpose of this is to annoy computer users and force them to acquire the paid version of it.

A fake alert stating about “Antispyware software warning” is part of a counterfeit security program known as Desktop Security 2010. The message implies that computer is under attack and recommends software to remove virus presence. Even with identical interface as legitimate Windows alert, be aware the way it notifies you is far from real Windows warnings. First, legitimate system tray alerts never endorsed a product to purchase in order to resolve certain issue. Second, fake alerts are very aggressive that user may find them annoying at times. 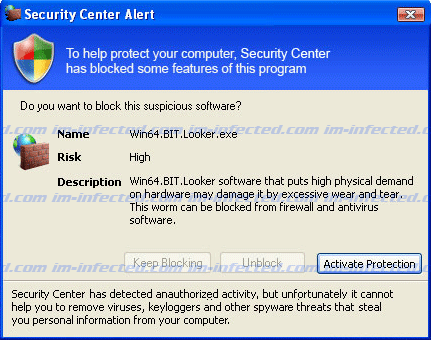 Win64.BIT.Looker.exe is usually shown as a threat that comes as part of a rogue security program.  This notification is unsafe and there may be no other malicious program inside the computer except from Desktop Security 2010. The same malware fabricates the false alarm. The mentioned rogue antivirus software is messing with your computer and producing falsified data in order to convince you to pay for the registered version of it. This tactic is very common to rogue security product and is effective in misleading computer users. 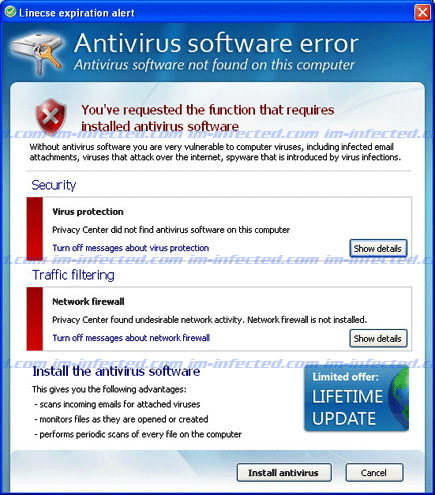 “Antivirus Software Error” warning is another misleading alert of Privacy Center rogue antivirus program. It was obvious that this was issued as a scare tactics to force its victim into acquiring the licensed version that expires as it shows in the screenshot image below. As a matter of fact, ”Antivirus Software Error” insists that you are the one who requested to install this program as stated on its message: 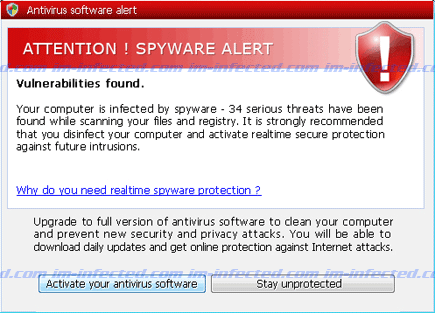 “Attention! Spyware Alert – Vulnerabilities found” is a usual warning message issued on computers that are infected with rogue security software. It will try to convince victim that system is compromised and a licensed version of endorsed program called Antivir Solution Pro  must be purchase. Fake pop-up alert such as this one is typical to rogue program operation.